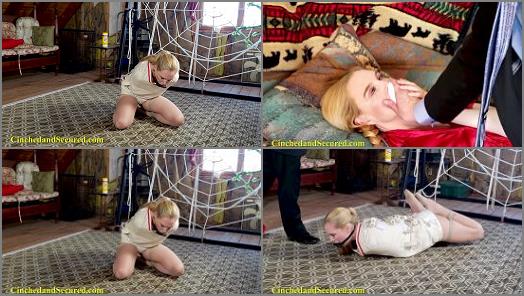 Ariel had decided to see a therapist concerning her kinky lifestyle and open sexual relationships. Rather than being troubled by them, Ariel was embracing them fully and wanted some perspective on why society at large frowned upon them.Unfortunately for Ariel, her therapist had an even more prudish outlook than the mainstream world did! As she described her sex life in great detail, he grew more and more disgusted and outraged by her lifestyle, and decided to “cure” her for good! Before she knew what had happened, she had been snatched and secreted in his attic, clad only in a straitjacket and a pair of sheer pantyhose! Her legs had been folded beneath her and bound, preventing her from escape! The therapist grew tired of her screaming and shoved a huge rubber cock down her throat, strapping it in place, ignoring her garbled protests and her choking and retching. As the poor girl fought to keep from gagging on the thick fat phallus, she wriggled and squirmed in vain hoping to spot a way of escape. The gag was pure agony, as she coughed, gagged and drooled uncontrollably, the attic space filled with the sound of her trying to keep from vomiting as her gag reflex was endlessly and constantly triggered. Her nose running, mascara dripping down her face, Ariel could not keep from crying as her new life began!