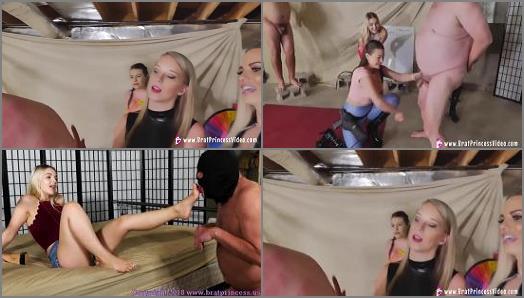 Girls love to play “Brat Princess Wheel of Misfortune”. The two teams, team “Brat” and team “Princess”, each consists of 2 ladies and a male. A girl spins the wheel of misfortune and then applies the punishment to the other team’s male trying to get him to break. If he breaks, then the girls get a point. When on offense, the ladies spin a colorful wheel and then apply that punishment to the other teams’ girl’s male. They slap, kick, punch or stomp as hard as they can to get the male to break. The girls cheer each other on. “Kick harder Kaylie!” “…as hard as you can Macey!”.
Defense is very important in the game. When it is their male being slapped, punched, kicked, and stomped, by the other teams’ girls the girls cheer on their male and offer words of encouragement and or threats of additional punishment. The male will stand longer while being attacked if the girls cheer him on or threaten him with something worst! The male will make a decision to carry on with its beating or to break and lose his team a point and gain the wrath of the girls on its team. Sometimes the girls will threaten their male before the punishment to not break. The male hears his girls cheer and threaten him while the other teams’ girls encourage their teammate to hit harder. So much fun! Clip stars Kaylie, Mariah, Kat and Macey.
Part 1: Trample, lashes, ball kicking, face slapping, girl’s choice, extreme whipping (9:51 long)
Part 2: Trample, ball kicking, ball kicking, Girls choice, ball kicking, lashing, girls choice, ball punching, knee kicks (10:15 long)
Part 3: Ball kicking, ball punching, kneeing, spin again double up, face slaps, spin again double up, face slaps, ball kicking, ball punching, thrashing. (11:46 long)
Part 4: Face slapping, trample, face slapping, whipping, ball kicking, ball kneeing, thrashing, spin again double up, lashes, face slapping, ball kicking (14:12 long)