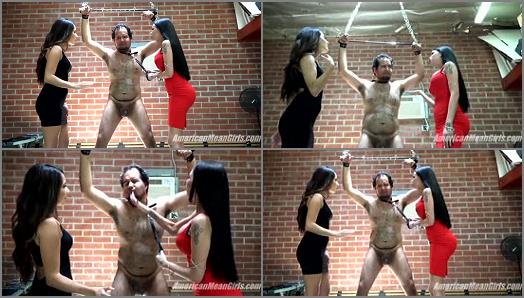 Miami Mean Girls is run on basically 100% slave labor so the girls can enjoy their amazing and fun filled lives with as much free time as possible. It’s a great system but sometimes the slaves forget their place. Princess Bella informs Goddess raven that she just caught one of the production slaves jerking off to a video he was supposed to be editing. And if that wasn’t bad enough the video he was jerking off to was one featuring both Goddess Raven and Princess Bella. The slave is going to pay for this!
The slaves hands are cuffed overhead to a spreader bar as he is confronted by Princess Bella and Goddess Raven for his crime off jerking off to their videos when he should have been editing. Princess Bella tells the slave if she catches him jerking off again she’s going to cut his cock off! Goddess Raven thinks the slave’s dick must have already been cutoff it’s so small she can’t really see anything down there. Princess Bella and Goddess Raven punish the misbehaving slave by spitting in his face and slapping him in the face over and over again until there are tears in his eyes!