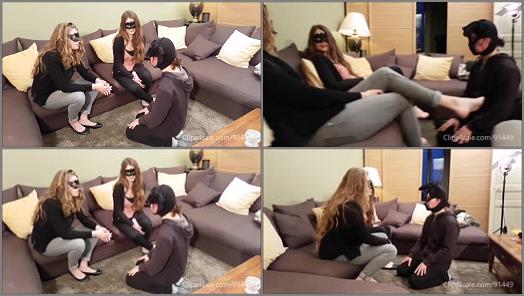 We re-started sessions saturday. Sasha speakt about the sessions to a friend of her, and this new girl wanted to try. Here is Elena. This girl is incredibly beautiful. I mean…Really superb. Her visage, her face…WOW. Shame you don’t see here without the black mask here.She is just dazzling. I’ve rarely seen a girl as beautiful as here (and I see a lot of beautiful girls)
The session was far less dazzling. And not because of the girls !
A very new slave contacted us to try one of our session, and he clearly didn’t have any experience in being hardly face-slapped. (or ultra soft experience, because he said to me that he already recieved violent slaps, but girls and us understood very quickly that the slaps he received before were not violent at all). He already saw few of our clips, and he seemed cool and relaxed. So, I am told myself : He will be good.
First slap of Sasha : He was litteraly choked by the violence. You can clearly see it. Totally chocked.
This slap is what I consider medium here. Very hard for almost everyone, but medium here. Girls continued, and Elena gave her very first slaps. The slave couldn’t stand anymore, after a series of slaps, he was holding his ears, at the very verge of crying. He was clearly totally chocked. Girls just totally mock him (Sasha is incredibly humiliating !). After 7mn, I shut off the cam and asked if he wanted something to protect his ears, because it was only the beginning and we couldn’t continue like that. He told that he wanted to stop. It was far too violent for him.
He left. The two girls was extremely frustrated to not have unleashed theirselves.
I am going to explain you : In our session, we ask the “slapping ball” to resist one full hour (3 X 20mn session) against a payment I give. He resisted 7 minutes, and girls were extremely frustrated.
My fault : I should have put the slave in a test session before, with Anamera or Sasha. We are going to do that for the next ones.
Despite his short duration, the clip is pretty useful., because it shows that a very few guys can endure girls’ VIOLENT slaps. We got a lot of slaves who surrended very quickly since the beginning of this studio. This clip will serve to recruit next slaves. Some stuff to know :
1. 1. We speak about women’s extreme slaps. Not school girls’ little smacks.
2. 2. Girls are without pity, and they are not here to have pity. They strictly don’t give a about the guy. The guy is a slapping ball. Period. This is not BDSM, but girl’s distraction, a girl’s way to let stream off. We don’t care if the guy is happy to be slave in our session. They are not here to make the slave happy. I pay the slave, and we have rules. If the slave agrees with the rules, so you can participate.
3. 3. The guy must not expect sympathy from the girls. Girls are not here to be slave’s friend, and they all know it. The slave must not expect girls to be nice with him or to give him so solace. They are here to earn money while having fun and challenging theirselves. Girl’s pleasure only. Period.
French Girls Hard Slaps is going to end very soon. The next project will be incredibly crazy, and incredibly violent too. Ultra, Ultra violent. It won’t be on C4SALE, and it will be totally independant. Be ready. I gonna explain you more on the next update !