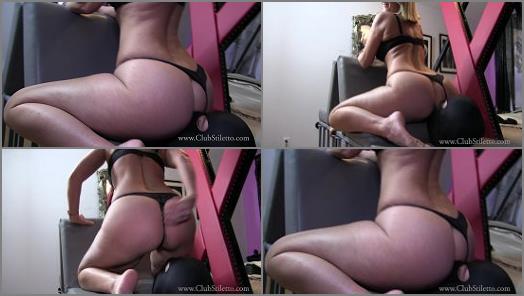 Kandy has one of her step boys locked in the cage, only his head sticking out as she wants her asshole worshiped. As the scene opens she has junior sucking on one of the heels on her stilettos. She tells him if he pleases her she will make him her full toilet. Soon enough she tosses the shoe to the side and removes her panties. “Remember pussy is only for daddy” she tells him. She turns on the bench so her ass is in his face and tells him it should be nice and dirty. She tells him she hasn’t gone since yesterday and this will really loosen her up. “After you’ve eaten it I want you to keep it on your breath all day and when you talk to people really get in there faces” she tells junior.
She comments how square daddy is and how he doesn’t even like looking at her asshole so she can only imagine his shock if he ever saw what was going on. “Breath in daddy’s face too” she tells him. She then breaks the news to junior that she is giving the same treatment to his brother so there is no need to be shy when around with each other. “Maybe it will give you something to talk about” she says with a laugh. After some deep rimming the camera moves in close so you can see Kandy’s hole but then she orders junior to get his tongue back in her because she has to fart. She blasts a very wet sounding fart and she laughs as junior grimaces. She presses her cheeks all the way into his face and then blasts another juicy fart. “Lick it up” she tells him. Now she bounces her ass into his face and tells him to keep his tongue out and firm so it gets in her deep. Then another fart and this time she tells him to open his mouth wide.