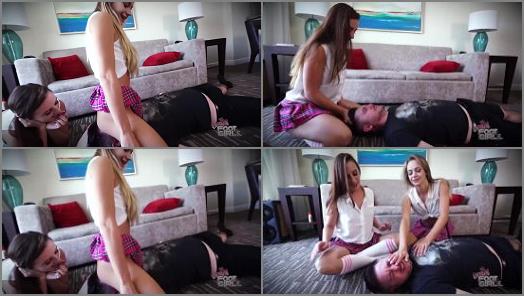 The girls are watching TV at Naomi’s house (wearing school girl skirts with thongs underneath) when her step brother comes home and demands to change the channel, the girls protest but he does it anyway and sits between them on the couch he starts coming onto Ashlynn telling her he always admired her ass. This really pisses the girls off so they say instead of watching the tv and hitting on them, he can wrestle them, if he wins he gets to watch whatever he wants, if the girls win he has to admit to the whole school that the girls beat him up. He thinks this will be easy so he agrees. The girls grab him and are able to get him to the ground, Naomi puts him right into a reverse scissor he starts struggling to try and get out and the girls are laughing at him. He is still talking trash while in the scissor hold so Naomi tells Ashlynn to shut him up, Ashlynn then reverse facesits him while he is still in the reverse scissor. He struggles but goes out. The girls celebrate thinking its done, but he wakes up and says they cheated, so now Ashlynn puts him in a reverse scissor and Naomi reverse facesits him, he goes out again. The girls decide they are having more fun putting him out than watching TV. They wake him up again and Ashlynn reverse facesits him while Naomi gets a close up view and is coaching her about how great his face looks being smothered in her ass. He goes out again. They switch places now with Ashlynn coaching Naomi, he again goes out. They wake him up again, this time to double facesit him Ashlynn in reverse Naomi in forward. He goes out again. They switch positions and put him out again. They wake him up again Naomi reverse facesits him while Ashlynn gets a close up view and he goes out again. Naomi then tells Ashlynn that they should put him out one more time but she wants to watch Ashlynn knock her brother out, Ashlynn reverse facesits him while Naomi is telling her how hot it is making her seeing her suffocate her brother, she gets a camera to take pictures of Ashlynn’s ass on his face, he goes out again and while still sitting on his face Naomi checks his arm to make sure it is limp, and they talk about how they are going to show these pictures to everyone. Ashlynn then gets up off of him and the girls laugh at his limp body and they leave him there.
Starring: Naomi Swann, Ashlynn Taylor, Jason Ninja
*FACESITTING* *ASS SMOTHERING* *SCISSORHOLD*