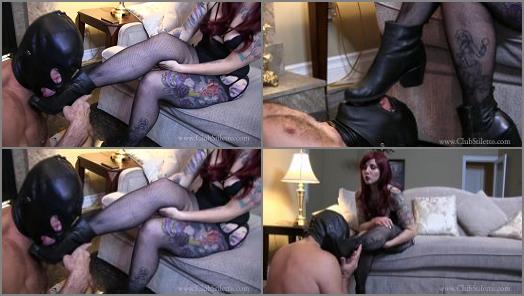 Lady Lennox calls her slave over after having had him spend half the day kneeling in the corner. She tells him her boots are dirty and she wants them kissed, worshiped and licked clean. He lays on his back and she rubs the soles over his tongue delighting in the fact she knows they are very dirty from her night out at the gay club. Not wanting him to get lazy she tells him to sit up so he can better attend to every inch of both boots. “You’re a dirty slave and dirty slaves like dirty things” she tells him. She then says she wants to see the entire boot wet with his saliva. The slave eagerly licks away as if kissing his first girlfriend.
Lennox tells him tomorrow at her party he will be licking everyone’s boots. “And I’m not just talking about the women” she adds. She tells him he’s just a dirty boot licker. “Everyone will be asking, where’s dirty” she tells him. She asks him if he loves being her slave even though she keeps him naked and in her cold dungeon every night. “I love being your slave he replies. “I need to keep you cool for your hot Mistress” she tells him, adding “suffering is part of the job after all.” Lennox has an amazing ass and she knows it as much as anything keeps the slave motivated so she shifts on the couch so her ass is hanging over the edge and allows him to kiss her cheeks while she thinks about the fun she will have tomorrow night at the party.