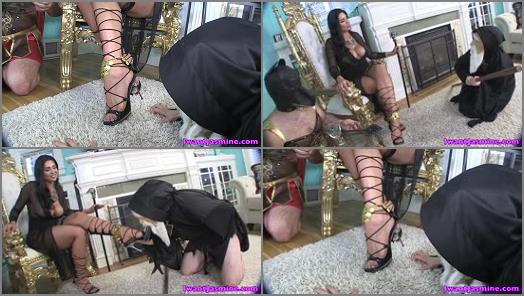 Custom: Background : The Evil Queen rules Her empire. All men are her slaves and they are reduced as mindless jerking zombie to keep their obedience. No more rebellion. But one day, one slave broke the spell! He has been captured and enslaved again. Then the Queen interrogated him to know how he broke the powerful spell. He talked and explained that a powerful wizard cured him… No choice for the Queen. She must capture and enslave this wizard.
The scene : The wizard has been captured and brought before the Queen. She sits on Her throne. The Queen asks him why and how he cured the slave. He explains that he cured the slave with strong and adds that he lived hidden. He studyed magic for years in order to fight against Her magical power. He wants to turn back to the time where peace and no slavery were allowed in the empire. The Queen laughs at him so evily. She mocks him. She tells him that it will never happen. In fact She is going to enslave him with her strongest spell. He protests and says that it won’t happen because he could break the spell once so he has the power to resist Her this time too.
She is amused and suggests him a fight. He is so confident that he is sure to win and defeat Her! She starts the fight with Her magic love dust. She throws the dust to his face. He is a little dizzy but resist. He even tries to her with his pendant as attack. It’s useless. The Queen laughs evily at him and looks deeply in his eyes and start talking to his cock. She orders him to obey and surrender (She says the same kind of things as the previous clip).
He struggles for a moment. When he understands that he is weakening he tries to escape so he looks away from Her marvellous gaze. He looks down at the floor. Very bad idea. Now he looks at Her divine feet. She explains him that he did a mistake (now he cannot look away than Her feet). That Her feet are the most beautiful in the world! (Seductively , legs crossed, she makes very sexy rotations and plays dangling with Her sexy shoes). She asks him if he agrees with the divine beauty of Her feet.
Completly broken he agrees and fall on his knees fully erect and aroused. It’s time for Her to cast Her strongest spell. The foot fetish spell. She laughs evily and says “believe Me, this one is unbreakable”. Once done it is impossible to get hard for anyone but the Queen! She shows him the top of her feet (keep the shoes on and continue the foot play) with great toepolish. She makes him repeat again and again (around 10 times) that he is in love with Her divine feet. He is a little resistant at first but more and more suggestible with the repetition. She becomes more and more evil and bratty. She feels and enjoys Her victory. She then makes him suck Her toes while jerking his dick. She explains that it is a double stimulation! So the addiction to Her feet will be deeply seeded in his brain and associated with pleasure. She encourages him to worship and in the same time jerk faster and faster. When he cums he is like a zombie at Her feet and recognizes the Queen as his Goddess! He is Your slave forever.