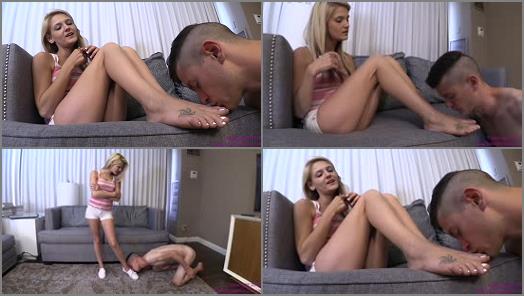 720 HD: Danni is being babysat by his younger classmate, Hope. Hope bullies danni into taking off all of his clothes. Danni does not like being babysat or bossed around by someone younger than him. He tells his babysitter that he does not want to take his clothes off. Hope tells danni that his clothes are really stupid looking and that shes the boss. Danni eventually does as hes told and takes off his clothes for the babysitter. Dannis mother has left him locked in a chastity device. Danni is really ashamed of it. He tries to cover the device with his hands. Hope examines dannis chastity. She giggles. Hope thinks dannis chastity is much too big. His penis is so small. Hope thinks he could fit in an even smaller size. Danni is just so pathetic. Hope now understands why danni still needs a babysitter. She asks danni is hes done all of his chores. Danni has not. Hope tells danni that he has to kiss her tennis shoes. Danni rather finish his chores before his mother gets home. Hope gets upset. Danni gives in and kisses Hopes sneakers. Hope tells danni to take her shoes off and kiss her toes. Danni kisses all of his babysitters toes. Hope still isnt pleased. She tells danni to suck on her toes. Danni does as hes told. He sucks on his babysitters toes. He fits all of them into his mouth. Hope tells danni that she wants him to paint her toes. Danni says that he really should get back to his chores. Hope gets very upset. She is the babysitter and danni has to do whatever she says. Danni gets quiet. Hope gets her toes deep in his mouth. She tells danni that her friends are coming over to watch a movie. Hope wants danni in a tighter chastity before her friends get there. She makes danni put the tighter chastity on in front of her. Hope makes danni kiss her ass. Danni is going to have to serve Hopes friends all night, naked, and in a very tight chastity.
Clip contains: Hope Harper, Brat Girls, Babysitter, Foot Worship, Chastity, Ass Kissing, Sneaker Fetish