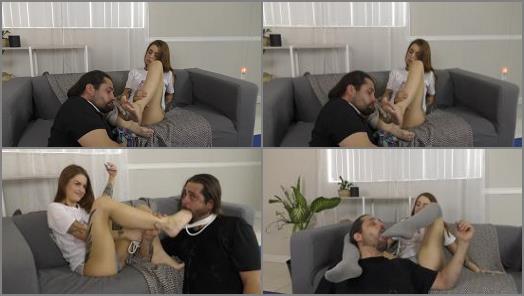 Jasper Reed looks gorgeous in a t-shirt and grey thigh-highs, sitting with an ankle crossed over her knee. She motions for Trick to come to her. He crawls in quickly and begins to imapatiently remove her sneaker. “Slow down.” Jasper says. He removes the other one slowly and smells her socked foot before she plunges it into his mouth. She deepthroats him with her socks on until both socks are saturated with spit. Certain that he’s sucked all of the stench out of each sock, she allows him to remove them, exposing a blue, french-tip pedicure. Smiling, Jasper wiggles her pretty long toes , then slides them between tricks lips. He gags as her long toenails push past his uvula. Jasper’s smile lights up the room as she reaches for a rope she has draped over her shoulders. Hooking the rope around his neck and using it for leverage, Jasper fits over half of one foot into Trick’s mouth. She keeps this up until his face turns pink and his eyes water. Her grip on the rope doesn’t let up even as he is nearly spitting up on himself. “Yeah, there you go.” she says. Being the pro that she is, Jasper knows all the best ways to position herself to make her foot go as deep as possible. This spells trouble for Trick and has him covered in his own saliva and vomit for most of the clip. She finally pulls her glistening toes out of his mouth, drops the rope and declares “Pathetic” to let him know his time with her done.