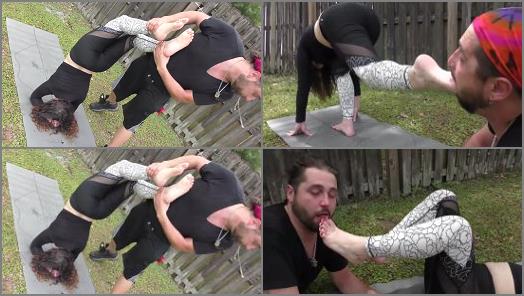 Riley’s in the backyard doing barefoot yoga. Her natural curls bounce as she transitions from one pose to the next. She smiles and with a flick of her wrist, signals her pet to come to her. Like any decent pet he seems to know the drill and he crawls to her, lips parted in anticipation of Riley’s extended toes. She centers herself and then stands; one foot on the mat and the other forcing itself down Trick’s throat. He gags. Riley changes poses and plunges her foot back into his mouth. For just a moment she allows him the privelage of licking her soles top to bottom before driving his jaw open with her entire heel. She wipes her feet on his face, disgusted with his saliva. “Let’s see if we can get them both in.” Riley flashes a smile and rams both feet into his mouth. Trick’s jaw fully extends, disappearing into his neck as he tries to to take both size 8 1/2’s simultaneously. One after another, she violently swaps feet seeing just how far she can push them until Trick vomits in the grass. “Again.” Riley commands, satisfied with the outcome and wanting more. On her back, Riley makes him gag himself with her long feet until he vomits again and again. She stands on her head and laughs while he obediently thrusts her toes to the back of his throat. From there she transitions to a more relaxing position and footgags him to the point of sickness several times until she gets bored of him and moves on with her day.