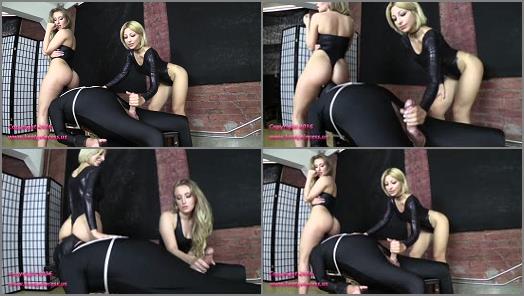 Today in the Edging Salon, Alexa and Harley want to see how many times they can ruin their patron’s orgasm. He’s been dropped off on his lunch break by his Keyholder for a routine quarterly release. They want to ruin him as many times as they can, as efficiently as they can, so they can put him in chastity and send him right back to the office to earn for his Keyholder. Harley bounces her perfect ass on the patron’s face to speed up his ruins. Alexa gets him to the edge, then passes the cock off to Harley. Then, Alexa sits full-weight on the patron’s face while Harley edges him. Alexa implements the four ruined orgasms. She takes care to squeeze every drop from the patron, ensuring he receives as little pleasure as possible. This release isn’t about him getting off like a perverted male! It’s about keeping him dutiful to his Keyholder and motivated to serve Womankind. He makes such a big fuss every time he is ruined. Crybaby. You’d think he’d be more grateful his Keyholder lets him get out of chastity at all! He wants a full orgasm, and is vocal about it, but of course he’s not going to get it. Not here at the Edging Salon! He gets really whiny at the end, begging the girls to stop. They do not care at all about what the patron wants. This is about the training and conditioning his Keyholder has requested he receive. They clear out his pipes, lock him in chastity, and send him right back to the office.
Clip contains: Alexa, Harley Jade, Handjobs, Ruined Orgasms, Female Domination, Face Sitting, Edging, Bondage Male