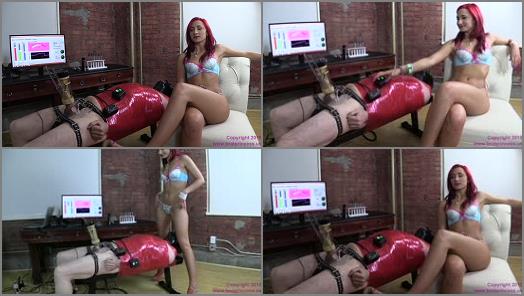 In this interview, Goddess Amadahy answers everything youve ever wanted to know about industrialized male milking. She even offers a demonstration of her work as teaser. She answers, What was the first milking like? Did the slave cooperate or make a fuss? Amadahy describes the particulars of incorporating the cow you see now into the machine. She recall the huge fuss he made when he was first introduced to his life as a cow. She talks a little bit about the daily schedule of a milking cow. The interviewer asks Amadahy to talk more about the male currently being milked. Whats his story? Amadahy relates that the cow on the bench was actually once a sugar dummy. He became useless as a sugar dummy when he lost his job, so he was hooked up to the machine. His pre-cum is now used as a source of cash revenue. The nice thing about this particular cow is that he has a lot of fetishes and sexual interests that can be exploited. Amadahy talks about her role as teaser. Her job is to keep the male constantly sexually stimulated to increase its productivity. This one has produced almost three ounces on her shift! The interviewer asks Amadahy if the cows productivity has changed over time. Amadahy answers that most cows do become less productive over time. Its called the milking bench blues. Its most likely the result of constant anal electrocution combined with long periods of time away from their Princesses. Amadahy reiterates, again, that this is why her job is so important. Shes there to keep things fresh. The cow shouldnt be thinking about how long its been attached to the machine, it should be focused on the wants of its Princess and the beauty of its Teaser. The interviewer asks, What happens to a cow when its no longer profitable. Amadahy responds that most of the cows are castrated when they can no longer produce. The skin of the scrotum is actually quite useful for making small toiletry bags. Amadahy goes on to answer, What is a typical Princess/cow relationship? She describes a variety of types of relationships between Princesses and cows. They vary greatly depending upon the particulars of the Princess. She also reveals what cows are fed, and talks about some new innovations in the male milking industry. Amadahy even offers us a demonstration of her work as a teaser. This is seriously sexy must have clip!!!
Clip contains: Amadahy, FEMALE DOMINATION, male milking machine, bondage male, tease and denial, face sitting, interview