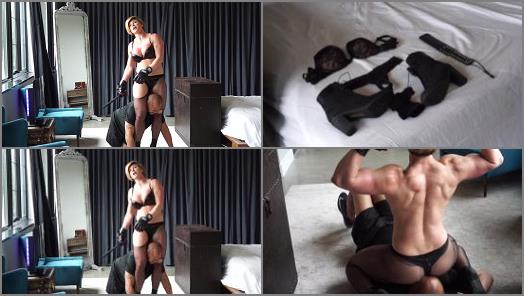 All Rapture wanted to do was get i a good workout. Unbeknownst to her, Rapture’s creep “neighbor”, who happens to be a huge fan, has been stalking her for months. Taking note of her gym schedule, the creep is finally able to corner her in the middle of a workout. The creep introduces himself, telling her how much he admires her, and asking for her advice for a business plan of his. Since they live in the same complex, he is able to convince her to come back to his place briefly to go over his plan. Once there, his true intentions are expressed. Noticing the wardrobe he has set out on the bed, he is coerced to tell her the real reason for luring her back to his place. The creep lets her know that he would do anything for a session with his favorite Goddess. Reluctant at first, he is finally able to get her to agree. She promises him a brutal beating; one that he will never forget. After changing into the wardrobe, she comes out into the room and is immediately pounced on by him. On his knees, he begins to worship her muscular thighs and large ass. So, excited by the nylons, he ends up ripping them while in a frenzy. Enraged by this, Rapture begins a horrific beating. One that we’re still sore from just from watching. She hits him with a barrage of punches of knees and until he falls to the floor in pain. Taking advantage of the moment, she tramples and stomps him mercilessly with the boots he so adores. She proceeds to drag him around by his balls, punching them in the process. Ending up sitting on his chest, she removes her top, giving us our first taste of her beautiful, humungous tits. Rapture takes those tits and slaps his face with them until he is dizzy, next picking him up by his cock and throwing him on the bed. She proceeds to drop full weight on him, coercing him to clean the bottom of her boots, and once removed, her sweaty nylons. Noticing the rip from earlier, she takes out his cock and coerced him to fuck her nylons until she’s satisfied. Always one for a good ending, she rips his cock from the nylons, and bites it and his balls as hard as she can. With a few spits in the face and a final barrage of hits, she leaves the creep on the bed, confused as to what just happened. We’re not sure if he got the session he’s always fantasized about… You be the judge.