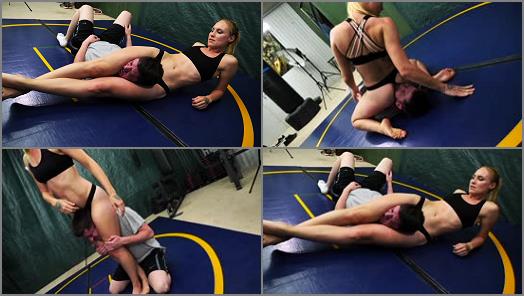 The always BEAUTIFUL and always BRUTAL Jolene Hexx returns to ScissorVixens in a continuation of her previous and very popular SAVAGE SCISSORS video in Part 2!
The last guy she totally DESTROYED with her long, lethal legs has not been seen on ScissorVixens since (for real!) after the scissor beatdown she administered to him so enter his little friend…Fluffy.
We did warn Fluffy, as did others who have felt the wrath of Jolene’s thighs, that he’s got to be ready for some REAL PAIN and to make it stop…just tapout when you have to.
Needless to say…there’s a whole lotta tapping in this video!
One of Jolene’s trademarks is SCISSORING YOU SENSELESS WITH A SMILE on her pretty face along with a few giggles at your helpless situation between her SAVAGE SCISSORS and you get plenty of that as well!
At one point, while trapping Fluffy’s poor little neck deep into a front head scissors, she laughs and says…”Watch this, his eyes BULGE every time I squeeze!”. So we move the camera in for a closer look and sure enough…those sexy, pulsating inner thighs around his neck nearly pop his eyes out of their sockets!
Fluffy is a little guy and in the beginning you’ll see just how much Jolene TOWERS over him while they are standing next to each other making locking him into a rig-busting figure-4 around his body as easy as tying a knot with her eyes closed! And of course her body scissors literally leave him both speechless and breathless!
But it doesn’t stop there of course as Jolene shows him her full array off leggy torture including ‘NOT A CHANCE!’ reverse head scissors and -like figure-4’s around his neck that nearly turn his lights out in seconds!
And that’s exactly what she does in the end with a BRUTAL across-the-neck scissors that sends poor Fluffy to la-la-land!
After slapping him back to semi-consciousness she tells him to get the hell off of the mat and looks at the camera with disappointment that she didn’t even break a sweat and has to still go to the gym to get a real workout!
So if you like Jolene’s previous SAVAGE SCISSORS then you’ll LOVE this one just the same!
As is always with Jolene Hexx…it won’t disappoint!