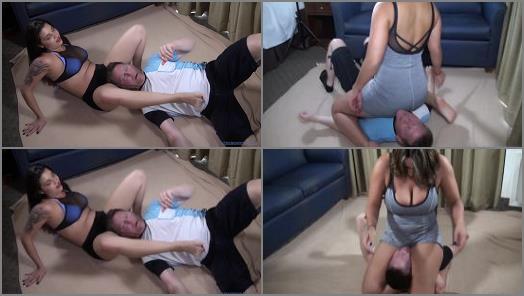 For you fans…you’re going to absolutely LOVE this one featuring the Cuban POWERHOUSE, Megan Jones, and her real-life friend from high school and new ScissorVixen…Mia Annabella!
When I found out that both girls were in Boston at the same time I was visiting…I knew I had to try and shoot with them both. But…I wasn’t quite prepared for what was to come!
For starters…Megan Jones has got to be at least TWICE AS POWERFUL as she was the last time we shot with her…and she was powerful back then!
Megan’s scissors are downright SCARY once she has those, as she calls them, “MONSTER THIGHS” around your head, neck or body!
And just when you think she’s squeezing at full power, because your jaw feels like it’s about to shatter, she turns it up a few more notches and it’s ALL OVER!
So, I was hoping that I would get a little break from Megan?s BRUTAL THIGHS since her cute, little friend, Mia Annabella, was new and couldn?t possibly have scissors anything like Megan?s.
Apparently Mia Annabella is one quick learner and her thighs are BIG and POWERFUL as well! Not to mention…she is full of ‘kick ass’ attitude and wants you to know that she can fuck you up just as much as anyone!
And that she did to Drew!
This video was supposed to be a standard 20 minute video but it seems that the girls were having so much fun…they decided to TORTURE me for nearly 27 minutes with non-stop SAVAGE SCISSORS!
Aside from the MURDEROUS SCISSORS…you’re going to love listening to both girls comments as they take turns from behind the camera while the other is CRUSHING poor Drew!
Both Megan and Mia were touring together at the time of this video and there’s a good chance both girls will be coming to a city near you!
Wanna get absolutely DESTROYED by these two Miami-based MAN CRUSHERS!?
Schedule your session today and tell them Drew sent you…they’ll give you the same Tag Team SUICIDE SAVAGE SCISSORS experience as they did me!