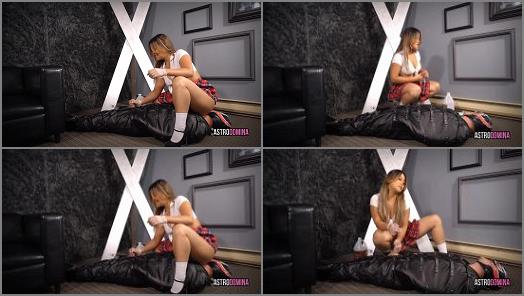 I fucking hate when men, especially professors take advantage of women just to perv on them. Let this be a lesson to all of you!
Sydney was at her chemistry professor’s house, who had invited her over to supposedly help her prep for her upcoming exams.. however he had alterier motives and Sydney caught him perving out on her! That’s when she decided to use her chemistry skills to concoct something that would knock him out just long enough for her to get her revenge
He wakes up and finds himself bound in a full body bag, he struggles but it’s no use he can’t even move his hands! Sydney is towering over him, berating him for being such a perv, always staring at her ass! Well, he’s finally going to get his over dose!
Sydney quickly drops her ass right on his face, and suddenly his struggles also comes with moans of pleasure. She knows she literally has him eating out of her ass now! She orders him to take it as she describes how she outranks him now and if he ever says anything she’ll reveal his perviness to the entire faculty!
What choice does he have? She reaches down and grabs his cock out of his confines. It’s obvious he’s enjoying this! So she grabs some super advanced lubricant and begins to make him her cock slave by stroking him to a pathetic orgasm! He’s completely under her control now! Looks like she’ll be getting straight A’s all semester!