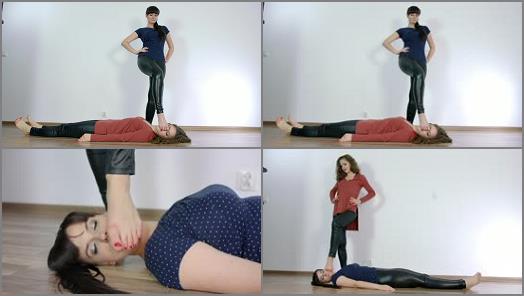 The scenario I would like is a foot fight/smother knock out match, with victory poses, between the two of you. It’s a best of 3 knock out match with the first woman to knock out her opponent twice the winner. Each round should be five minutes each. ? ROUND ONE – You and Klaudia are sitting facing each other – Klaudia on left, you on right – and press your feet up against each other, pushing at each other with your feet and your toes wiggling against each other. After 20 seconds Klaudia gets the upper hand and places her feet on your face; after about 10 seconds you are knocked out from the smell. With your sleeping face toward the camera, Klaudia does victory poses over you for the remaining time, rubbing her feet over your body and especially your face whilst bragging about how she is stronger than you and how she is the winner. ? ROUND TWO – As above only this time you win and pose over Klaudia. ? ROUND THREE – Same as round one, with Klaudia winning after 30 seconds and posing over you. She should pose over you in the same way for two minutes. Then she should hold your sleeping face up to the camera as a trophy, smiling and boasting about how she has defeated you. Then she should lie you down again do a foot on face ten count pin, slowly counting you out as you lie motionless. Finally, to complete your humiliating defeat, she should grab a marker pen, place your feet together and write the word ‘LOSER’ across the soles of your feet, holding them up for the camera to see, and the video should end with an extreme close up of your sexy, sleeping feet.