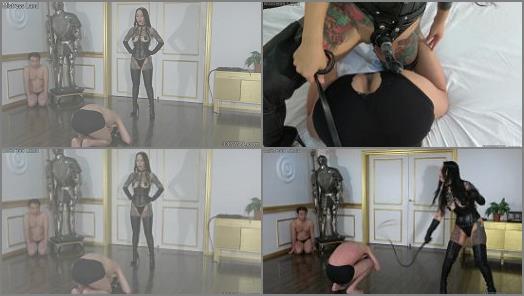 A look into a full day of Mistress Youko’s day off. The moment she awakes, she has her two slaves that she’s raising to lick her pussy and ass as well as drinking her thick morning golden shower. When she’s putting on makeup in front of the mirror, she has one licking her armpit sweat while she sits on the face of the other that’s being used as a human chair. And once again facing them drink her golden shower. For the slave’s meal, Mistress Youko mixes her regurgitated food with her spit and golden shower. In the bed, she straps her strap-on and face fucks them and also ravishes their ass hole. Any mistakes that the slaves make, Mistakes Youko would whip them at full force, bites their wound and has them drink her golden shower. Lastly Mistress Youko will sit on their faces until the slaves are at the brink of suffocating and stuffs brown shower in their mouths. Then give them extreme hard-core handjobs so she can get their semen to mix into the brown shower to make them eat each other’s semen.