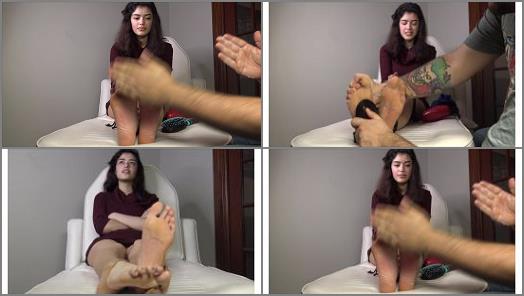 Here is another oldie but never posted goodie. Last night I was on discord with a really good friend and fan talking life and we were talking about Social anxiety. What many do not know is Rey has Social Anxiety. Its why I was shocked she responded to me and decided to come down and shoot. She was AMAZING to work with and a real sweet heart but I could see clear as day she had her own issues to work through. We still talk a LOT and she has a LOT going on right now in life but STILL does everything she can for her fans! This clip is a clear example of that. After the Raven shoot Rey was visibly exhausted as was I. We had one custom left and decided to push it. Unfortunately it did not work out since the next day her feet were not only desensitized but from the pen she was actually in a little bit of pain. So we pushed the custom. A few weeks later during an emotional rollercoaster Rey STILL got on a plane and came to not only finish a custom but to do her FIRST session. This was that custom. Rey has REALLY long sexy feet. We start with her in coffee tan pantyhose. She is tied up simple and I start with my fingers and she smiles giggling before moving her feet away. I then add the brush in and she begins laughing harder pulling her feet away. Then I switch it up and tickle her stomach and feet simultaneously. She giggles and laughs trying to hide her face in her hair before I rip her nylons exposing her BARE feet. Then I add lotion and now she is REALLY laughing making HILARIOUS faces as I tickle her soles deeply. She laughs and giggles complaining. But then I break the brush out again. She laughs more making even more hilarious faces. We end with Rey doing a foot show, freestyle tickle, and interview.