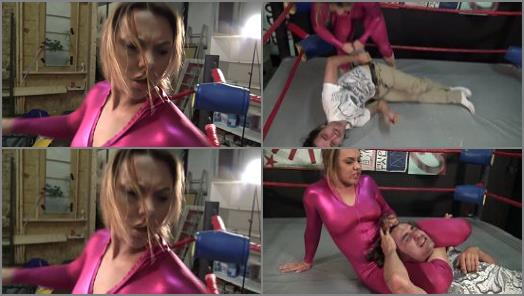 Maria the naked gymnast starts off clothed in an incredible clingy one-piece in which she attacks Thin Man in the ring with her trademark aggression. She is clearly trying to prove herself in the squared circle; she takes him down hard, slamming him by the neck and then catches him in a straight headscissors in which he taps. her wicked smile is adorable and her legs are concrete; the gymnast who’s spent so much time on the mat perfecting her form has her head scissors the bony homebody. She won’t release the hold despite his taps and keeps cranking it. “you’re so strong,” he says. She just smiles and pours the power on — her figure 4 head scissors uses her huge calves like baseballs to dig into his throat as pictures and catchers get closer to reporting. She bounces off the ropes and attacks him, slams him facedown on the mat in a rear naked choke she applies as a trach choke. She charges him again and takes him back down, telling him “get up bitch pushing him down on his face and then drawing him up in her rear naked choke, mean as a snake. Maria has the wimp in deep trouble. She challenges him to get up and fight, then wraps him up in a body scissors/rear naked choke combo; she smiles as he suffers. “You can’t breathe?” she questions then yanks back on the trach choke. She lets him know she heard him in the dressing room saying he’s more afraid of Andi; he wasn’t putting her down but Maria is mad. She combines a reverse facesit with an armbar and makes him scream while one of Florida’s greatest asses almost breaking his bird dome. “I’ll break your fucking jaw, huh?” she says. She slams him into the turnbuckle then executes a fireman’s carry, dropping him like he’s nothing to her. The gymnast on most blasts his head off in her headscissors, pouring the power on — she may not inspire the fear in Thin Man Andi does, but she is determined to hurt his neck and send him back to his hole. “I just want to fucking hurt you,” she says. Then her calf again on his throat. You really don’t want to make a gymnast mad when her job is hurting you with her legs. Then it’s the Maria we best know! She sheds the skin tight outfit to reveal her naked gymnast body. She is a work of art and she destroys him the rest of the way naked and mean, using the rear naked and then twisting his neck and throwing him onto the mat. And Maria does something very rare — she gets him in front had scissors, totally nude and powers it on, turning him purple, making him tap her concrete quads as she continues pouring pressure on the hold. She leaves him face down after a trach choke and telling him “get your fucking hands off me.”