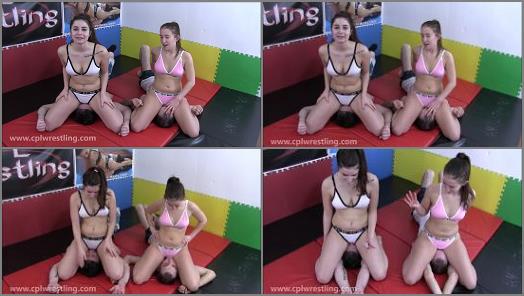 So Arianne decided to recruit her sister, Aubrey and this twisted sister is a bit different than the other ones. This time they had 2 male victims, Chris and chadam. They wanted to play a smother game and have some fun humiliating the both of them. Both guys are already laying on the mats as Arianne and Aubrey walk in. Both dressed in similar sexy outfits just different colors. Arianne takes Chadam, and Aubrey takes Chris. They pin them down and say “ok lets play a game whoever gets the most taps wins”. They both move up into facesits, then Chris taps first, and continues to tap more often than chadam. Both girls talk back and fourth keeping track of the taps. Looks like Chris tapped the most making Aubrey the loser of that round, so now they switch. Aubrey facesits chadam and Arianne sits on Chris’s face. First guy to tap out to ten that girl wins. Looks like Chris can’t seem to hold his breath longer than chadam, as he finally taps out ten times, making Arianne the winner. Both girls continue to play smother games with them, breath play and more. They completely humiliate them as the facesitting is nearly non stop. Aubrey and Arianne throughout the clip keep switching guys taking turns facesitting them into oblivion. Chris and chadam were exhausted and needed more air sometimes than they were willing to give them causing them to panic. the sisters are relentless, ruthless and unforgiving when it comes to smothering and dominating their victims. Unfortunately for both male victims, their time soon came at the end where the sisters decided to finish them both off. Aubrey sat on Chris’s face, Arianne on chad’s, and both girls stayed on top, ignoring their taps and putting them both out. The twisted sisters prevail once again in this all out smother match.