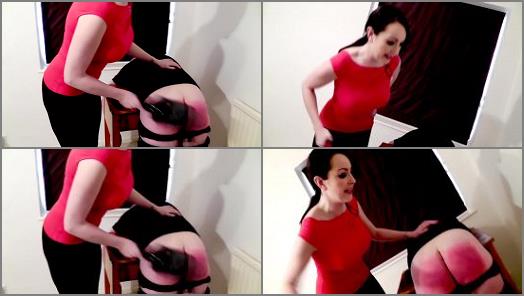 Jessica’s boyfriend comes in to say he’s off to the football but they’re meant to be having lunch together at a nice pub. Jessica can’t believe it. He’s done this one too many time. He has a severe issue with commitment. So Jessica grabs some handcuffs and says lets have some fun instead! Amidst protests that he going to be late, Jessica handcuffs each wrist then drags him over to the school desk and quickly bends him over it and secures the handcuffs to the legs of the desk. She pulls down his trousers and gets out a brown leather paddle and starts spanking his bottom with it. Jessica tells him how his behaviour has to change otherwise they’ll split up. She then gets another out another thicker black paddle to spank his bottom with, with some hard and fast strokes. He finally says he’ll try harder and he better do!