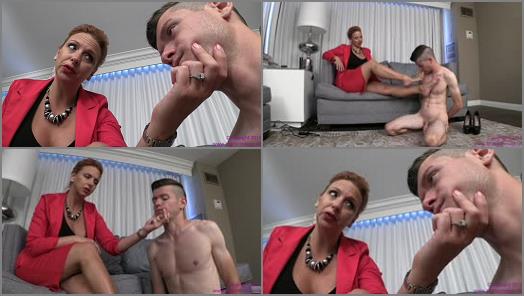 Briannas in a very good mood. Shes just gotten back from court. Briannas received a pretty hefty settlement from her third husband. Stupid little man thought he could get away without paying alimony. Well, Brianna nipped that in the bud. Now, she could use a little pampering. Briannas son, danni, has been home awaiting his mothers return. He kisses his mothers tall black leather stilettos, as hes been trained to do for her. Briannas almost immediately disappointed with her sons performance. She instructs the b0y to remove the shoe and massage her feet. The massage is passable. As Brianna begins to relax, she asks her son if hes been tending to his sister well. Danni complains, every time he cleans Odettes room, she makes a mess again. Brianna reminds danni that his younger sister, Odette, is now his key holder. A b0y should know better than to complain about his key holder. Brianna reminds danni that she can make his life much harder, he really shouldnt complain. Brianna explains to danni that its very hard for a girl to decide what to wear. Before complaining about Odette, he should consider walking a mile in her shoes. Its a womans duty to make sure she looks really good at all times. Looking good requires several wardrobe changes a day. Brianna reminds danni that he has a long life ahead of him. He better learn to adapt to the needs and wants of women. Otherwise, he will be more miserable than he needs to be. Danni listens to his mother. When he is told to, he kisses his mothers feet. Brianna asks danni if he has started his sisters homework. Danni admits that he has not started Odettes homework yet. This is unacceptable. Brianna shoves her foot deep into her sons mouth. Hell have to be taught a lesson. Brianna uses her sons mouth to pleasure her feet. Danni kneels before his mother, naked and in chastity. Brianna teases her sons chastity with her feet. She presses the device between her toes. Danni promises to never complain again. Brianna tells him that its too late. Hes going to have to start contributing a larger percentage of his allowance to his sister. Brianna tells her son that hes also going to be placed in a smaller chastity tube, and hell be milked less than once a month. In fact, she might only allow him release twice a year. Brianna is frustrated with dannis poor foot worship, as well. She holds dannis head and thrusts all of her toes inside him. She wants him to choke on her feet until the lesson is learned. Brianna reminds her son that no matter what she asks of him, the answer is always, Yes, Mommy. Briannas still feeling aroused from receiving her financial settlement earlier. She reminds danni of what happens when mommy gets aroused. Brianna takes the b0y by the ear and leads him into the bedroom.
Clip contains: Brianna, Female Domination, Female Supremacy, Taboo, Foot Worship, Foot Domination, Chastity