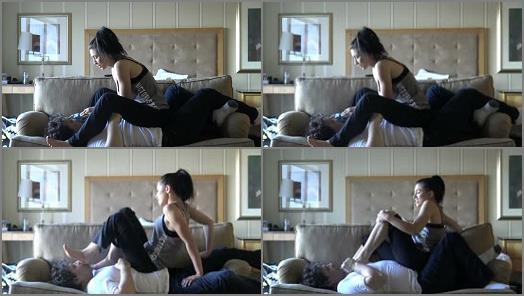 Nikki Next takes the camera by force and films herself deep foot gagging Fat Fuck on the couch as he suffers, gags, holds out as his face expands like a da seep thing. His face a mess, he takes the violence from her, above him, as she loves showing off to herself the pain and agony she’s inflicting, making him gag sounding like a broken bike horn or like he nearly has an entire foot in his throat like a stupid snake. Nikki gives him no mercy, spreading the mess from the gagging in his eyes across his face with her toes. She snakes one foot behind his head and gags him deep with the other. Nothing he says makes her stop. His breathing grows labored as she rams her foot down his mouth further, then pushes his nose up in pain. He retches and gags and she makes fun of him, finished — his eyes welling with sickness and tears in a violent and unplanned attack as the pretty and cruel girl brutalizes him. Duration: 9:53