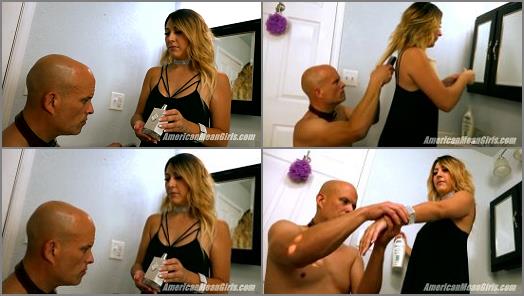 Princess Skylar has been a very happy girl lately. Things have started getting very serious with her new man and they are both starting to fall in love with each other. Princess Skylar’s boyfriend is amazing. He is tall, has a terrific body, has an amazing full head of hair and a great job in a large company. Pretty much the total opposite of Skylar’s ugly bald slave.
Skylar only dates real men, which is what her pathetic slave needs to understand. She would never date someone as ugly and pathetic as him. The slave has been getting jealous lately and Skylar feels as though he isn’t showing her boyfriend the level of respect that a King like him deserves. After all, he is the man of the house.
Princess Skylar’s man has just texted her that he will be arriving home from work soon and that he wants her looking cute in preparation for his arrival. Since he is a real man, he gets whatever he wants and Skylar is determined to make herself look pretty for him with the help of her slave. She feels that this is also a good opportunity to make sure that her slave respects her man and is completely aware of what she thinks of a loser like him.
The slave is instructed to brush her hair for her in front of the bathroom mirror while Skylar goes through all the reasons why her man is amazing. “He’s just so hot and sexy, his a real man unlike your ugly ass”, Skylar starts as the slave is coerced to agree while brushing her hair for her man to enjoy. “He actually has a full head of hair unlike you! Pretty girls like me would never go for bald losers. In fact i want you to praise my man out loud right now for having a full head of hair!”, Skylar demands. The slave is hesitant and doesn’t want to but he knows that he will have to start showing more respect to the Princess’s new man. “Your man is a King with an amazing full head of hair! I could never look like him because i am ugly and bald. All hail your man’s hair!”, the slave reluctantly says out loud much to the delight and laughter of Skylar. “That is so sad and pathetic but its true”, Skylar agrees.
The slave continues brushing her hair. Skylar also makes the slave thank her man for being so tall while he is so short! “I’ve also been thinking of other ways you can respect him. Since he smells so good all the time like a real man should, you should literally be worshiping his cologne!”, Skylar demands. The slave is in shock as Skylar grabs her man’s cologne bottle and instructs him to place kisses of praise on the bottle while she holds it. Skylark is hysterically laughing at this point and starts to take pictures on her phone of the loser kissing a cologne bottle to send to her man.
She decides that this isn’t enough, and that the slave will need to learn to truly worship her real man’s scent. So she tells the slave to open his mouth and begins to spray her man’s cologne into his mouth! “You will learn to respect what a real man smells like and you will learn to love it because his smell drives your Princess wild”. The slave winces in disgust as he is coerced to endure several sprays of cologne into his mouth.
Skylar informs the slave that he will need to be on standby to spray her man’s cologne on him whenever he wants from now on, including before work, during work and even before sex. The slave is utterly humiliated but just wants to make his princess happy. After he is done worshiping the cologne, Skylar needs to make sure that her body is nice and moisturized for her man, so the slave is tasked with applying moisturizer to her hands and arms while she continues to admire her beauty in the mirror. “Real men have their girls do this for them, you’ll never know what its like to have a girl primp herself for you”, Skylar reminds the ugly slave.
“Now i’ve put together a list of things you will need do for my man from now own, since he is the man of the house. Apart from being his personal cologne bitch, you will be ironing his work shirts and getting his expensive suits dry cleaned on a daily basis. You will also need to lick the bottoms of his shoes clean every day when he arrives home from work. And finally, i want you to wash his amazing Rolls Royce clean every day, especially for when he takes me out on dates”. The slave is essentially being reduced to being her man’s personal bitch but if he wants to stay in her life, he will need to serve her alpha boyfriend too.
Princess Skylar’s man is almost home now, so the slave is instructed to lick the bottoms of her heels a few times and spray some perfume on her before she goes to greet him. (This clip will show a great contrast between how hot girls treat their alpha boyfriends compared to how they treat ugly losers!) 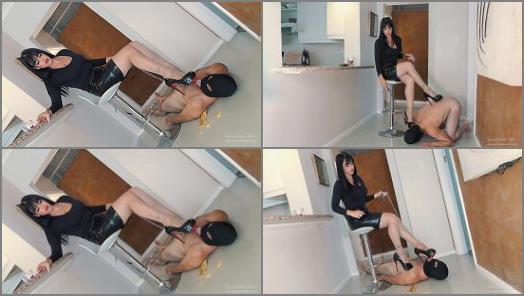 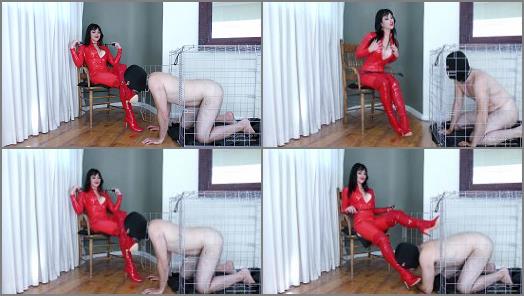 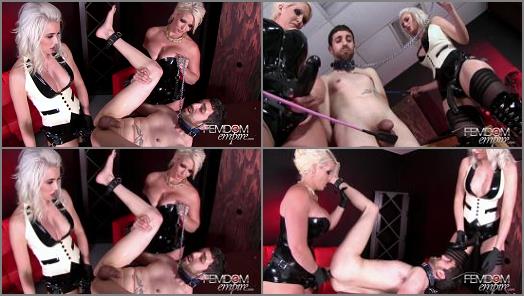 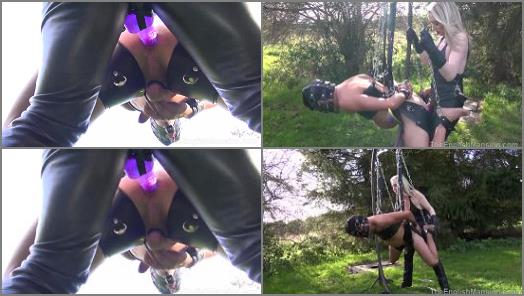 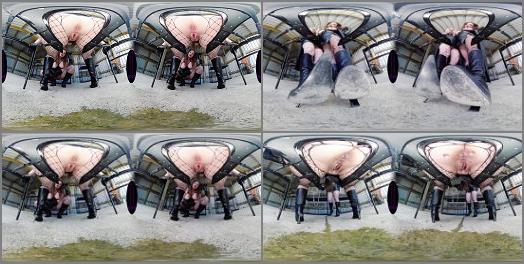 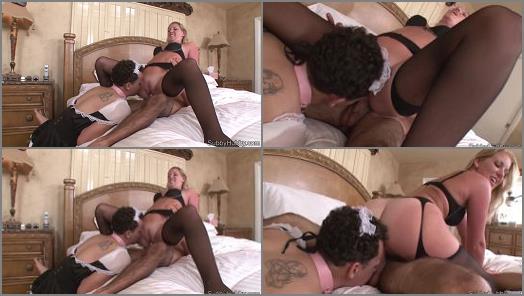 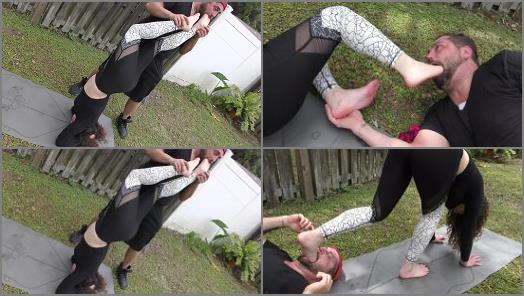 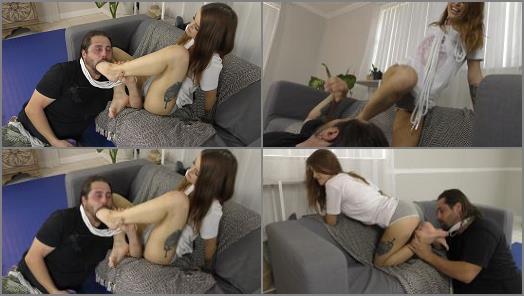 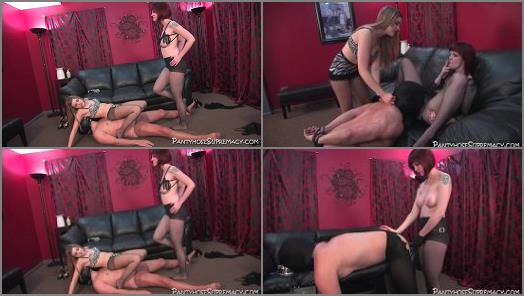 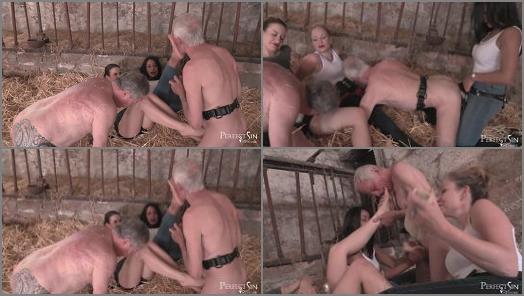 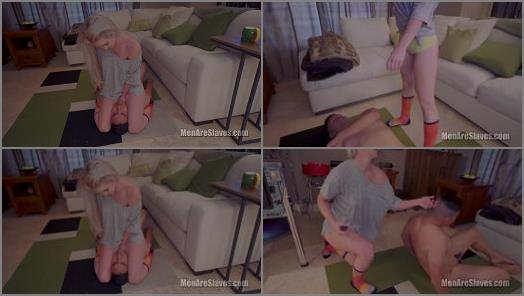 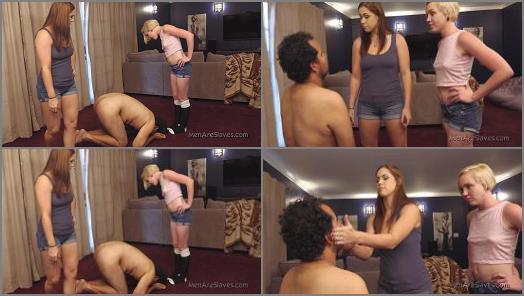