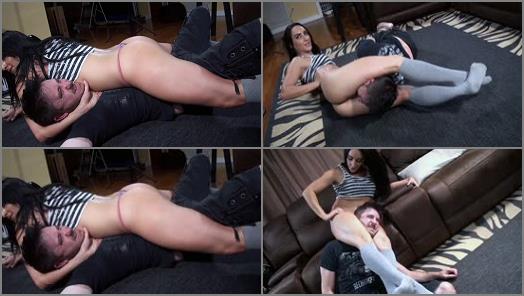 �
Chloe Lovette is well-known by many from her appearance on a few popular websites in the UK and now she’s decided to make her ‘scissor mark’ here in the USA in her first ScissorVixen video!
We’ve been a longtime fan of this SEXY dark-haired beauty from ‘across the pond’ for quite some time now!
She first caught our attention with those beautiful dark, captivating eyes, evil grin and cocky ‘I can kick anyone’s ass!’ attitude. Oh…and the fact that her legs and ass are a scissor-fan’s dream (literally if you don’t tap-out in time!) makes Chloe Lovette the complete ScissorVixen package!
So when she told us she was on her way to Florida and was ready to wrap those big, powerful British thighs around a few skulls here in the US to show us how they do it in the UK…we could hardly contain our excitement!
And when we asked her if she genuinely enjoys scissoring men (a question we already knew the answer to) she said without any hesitation…”Oh yeah…I LOVE squeezing men’s necks between my thighs!”.
Anyone who has watched Chloe Lovette in action knows this girl definitely gets off on CRUSHING men with her smooth but rock-hard athletic legs!
In Chloe’s ScissorVixen debut video she’s busy watching her favorite soccer (football team in the UK) team…Manchester United. But her Australian boyfriend doesn’t think as highly of her team telling her that they don’t have strong enough legs to carry them very far in the Champions League and will most likely finish last as well.
So that’s when Chloe decides to give him a taste of her ‘Champions League Legs’ by wrapping her BIG QUADS around his scrawny neck and giving him the squeeeeeeze of a lifetime!
Chloe Lovette is without a doubt one of the sexiest ScissorVixens EVER!
Not only does she have a pair of legs coupled with powerful glutes which she uses to her maximum advantage in applying devastating reverse head scissors…Chloe’s verbal skills are enough to blow your lid off as well!
She LOVES drawing attention to her “Big, powerful thighs…” and loves reminding you that you have “NO CHANCE of escape?” while she’s got you firmly trapped in her skull-crushing scissors.
And when it comes to scissor technique Chloe Lovette is as good as it gets!
Just when you think the victim’s neck or face could not possibly get any closer or higher in Chloe’s GRIP she reaches back, grabs the victim’s head and pulls him in even closer!
She wants to make sure you are as high and tight as possible between her thighs before applying her eye-bulging scissor holds! And this is most obvious whenever she clamps on her favorite…the reverse head scissors!
We’re very excited to feature one of the best scissor-girls on the planet finally making her debut on ScissorVixens!
So check out Chloe Lovette as she makes her CRUSHING American debut here on ScissorVixens!